The history of the Baptist church which now meets in The Abbey Centre can be traced back to the 1880’s. 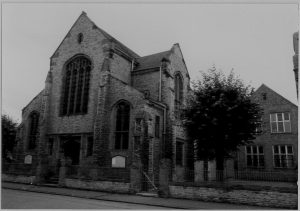 congregation in Far Cotton on what was then the Southern edge of the town. The newly formed church built its own premises in Abbey Road and was formally established in 1893 as Abbey Road Baptist Church.

For almost 100 years the church served its local community in Far Cotton. However, in the early 1970’s plans were being made to increase the population of South Northampton from 7,000 to 30,000 and in consultation with other churches in Far Cotton Abbey Road Baptist Church made the decision that they would move into the new area once the development began. By the late 1970’s the expansion of South Northampton had started. It was time for the church to move to a new location!

Northampton and would be called The Abbey Centre. The church was renamed “Abbey Centre Baptist Church”.  In 1984 The Abbey Centre Appeal was launched with The Rt. Hon. Earl Spencer as president. Cllr. Stan James (Mayor) and Michael Morris (MP) were vice-presidents.

In 1986 the “first sod was cut” on site by Cllr. Stan James. The building was completed in time for ACBC to hold its first services in the new premises for Christmas that same year. In January 1987 HRH Diana, Princess of Wales officially opened The Abbey Centre.

The building was multi-purpose from the start, built to house the church and to be available for hire and use by the growing community in East Hunsbury. Within three months of opening, the building was fully used, seven days per week, daytime and evenings. Our mission statement says that we are a church that is ‘seeking to serve the spiritual and social needs of South Northampton by recognising and affirming the presence of God in everyone’.

Over the next few years the multi-use games area (MUGA), youth wing, upper room, an IT suite and additional parking were added to the site. The total cost of the entire suite of buildings was around £750k.

Then in 1997 a chapel was added, initially for funerals, weddings and special services, but it is now used as our primary worship space.

The buildings were designed to be a place of worship and a centre for the use of the whole community. We seek to provide space for community groups to gather, for local people to hire rooms on a one-off basis and to provide social and spiritual help in a Christian context for all members of the local community. The buildings are used by many different groups on a regular basis (about 40 community based organisations), including a Moldovan Baptist Congregation which meets in the chapel and worships in the Romanian language.

The people of the church meet for worship and other church activities together, but they also express their faith by supporting the building practically, financially and participating in maintenance and various user groups during the week.

In the 21st century as a church we are privileged to be able to be part of the continuing story.

A BRIEF HISTORY IN PICTURES