The Abbey Centre in Overslade Close, East Hunsbury, was opened in January 1987 to serve the social and spiritual needs of South Northampton.  The popularity of this provision soon made it clear that apart from Sundays The Abbey Centre would be fully used for community activities and would not be readily available for more devotional purposes on weekdays. 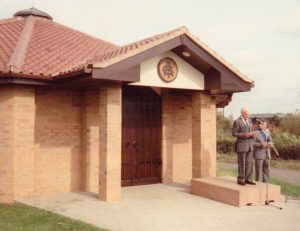 In 1988 the decision was made to add a small chapel seating about 120, suitable for marriages, funerals, church meetings, and private devotions.   The Abbey Centre Chapel was opened by the church’s life deacon, Frank Summerford, and dedicated as a place for prayer and devotion on Saturday September 23rd 1989.

The chapel in many ways enshrines this heritage. 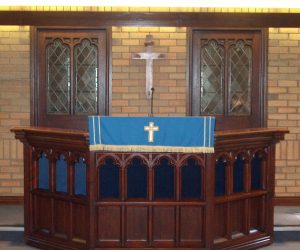 The Doors and Pulpit.

The solid oak front doors of the chapel, the doors into the sanctuary, those behind the pulpit leading to the chapel kitchen, and the exit door front-left, all come from the Abbey Road building.  The pulpit once formed the top of the Abbey Road pulpit. 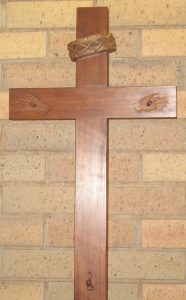 Three crosses, above your head as you enter the sanctuary, behind the pulpit, and in the vestry, are all made from one piece of wood. This formed the front of the organ loft balcony in the Abbey Road building.  The wood was cut and planed by Arthur Mitchell at Mereway Upper School. Two of the crosses were made by Tony Hollowell of Towcester Road Methodist Church. The crown of thorns and engravings on the cross behind the pulpit was the work of Arthur Warwick, a regular worshipper in the chapel.  The Celtic cross, usually on the communion table, was made by the minister, Ted Hale, from English oak cut in 1984.

The Wall-Plaques previously hung in Abbey Road, and the names Webb and Cousins are but two of the many names which have regularly featured in the church’s history. They publicly recognise loyal service and generous support which has been given.  The continuing generosity of one of these families supplied the chapel chairs and the Bibles for the congregation. Similarly the chapel hymn books were given in memoriam. 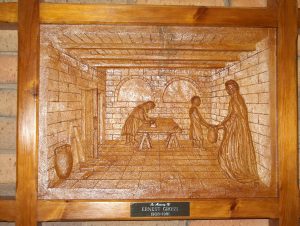 The Fired-Clay Memorial Picture of Jesus in the carpenter’s shop was made by Edwin Murch of Duston for Phyllis Gross in memory of her husband Ernie who died in 1981. It formerly hung above the choir pews in Abbey Road.  Ernie was a choir member for fifty years.

The Book of Remembrance was given by Bob & Janet Farey of Hunsbury in memory of their parents Bill and Emmie Hillyer of Far Cotton, and the book records the names of many whose deaths have been accompanied by generosity to the church.

The Small Stained-Glass Cross in the centre of the ceiling was given in memory of Alec and Lilian Hannah.

The ashes of former life-deacon Stan Harris were poured into the foundations of the chapel as it was being built, and a number of other people have chosen to have the ashes of their loved ones interred of scattered in the vicinity of the chapel.  In its comparatively short history, The Abbey Centre chapel has become a place of sacred memory for many.

The Communion table and chairs.

These formerly belonged to Vera Cox who died in September 1989. They were restored by Mr. Pat Delaney of Hardingstone. The table cover and the pulpit fall were made by Mrs. Mabel Rust. 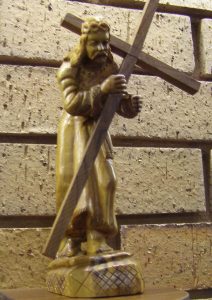 The Christ-figure, which previously stood on the pulpit in Abbey Road, was given by Pam and George White of Delapre. It is made of Olive wood from Jerusalem.  It invites us to be one with Christ in helping to carry the cross of suffering which is borne by many today.  Abbey Centre Baptist Church is a member of Amnesty International. This represents just one aspect of our desire to be alongside poor and oppressed people whoever and wherever they may be.  For similar reasons we support Baptist Home Mission. The Baptist Missionary Society and Christian Aid.

The Abbey Centre is a place which demonstrates God’s Spirit in the service which is offered through its activities. The Chapel is intended to be a place in which the presence of God can be discovered in quietness and tranquillity. Within its walls our hearts and minds can be open to feeling God’s love.  This is an example of a prayer which might be used:

“Almighty God, best known to us in love, in the fellowship of prayer I offer to you all that is unlovely, loveless and seemingly unlovable, in myself, in the circumstances of my life, and in the world in which I live.

I pray for Amnesty International and for all those people who make its work necessary.

I pray for Christian Aid and for the changes which must come to bring about an end to the extreme poverty of so many.

I pray for the work of the churches in South Northampton, that they may be true to the spirit of Jesus Christ who gave his life for others.

I pray for myself.  I thank you for my life and every good gift of your love. Help me to so love others that I may lose myself in such love and become a new person re-made in the image of the Prince of Peace.

God of peace, grant peace in our time: and let it begin in me. AMEN.” 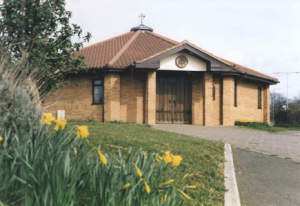